Polish Style in the Gardens of Rome

Polish Style in the Gardens of Rome

As I have recalled in the past, in the true heart of Rome, five minutes from Piazza del Popolo, there is a treasure chest of greenery, music and art. The Roman Philharmonic Academy has been based for more than half a century in the Casina Vagnuzzi, a historic building whose nucleus dates back to the sixteenth century and whose current appearance, of neoclassical elegance, is due first to Giuseppe Valadier and then to Luigi Canina.

The building was part of the large complex of the possessions of Pope Julius III just outside the Porta del Popolo, of which the adjacent Villa Giulia is testimony. It was later owned by Stanislaus Poniatowski, heir to the throne of Poland, before passing to Luigi Vagnuzzi whose name he still holds. In the Casina (which includes some beautifully frescoed rooms and in which the memories of the history of the Roman Philharmonic from 1821 to today are preserved) there are the offices of the institution as well as the Library. The building overlooks the vast gardens, populated by numerous plants both common and rare, a place where the summer season of the Roman Philharmonic Academy takes place.

This summer season is a real charm. It involves two concerts every night: one at 8pm in the small Sala Casella, a concert hall with about 170 seats, and one at 9.30pm in the bottom of the park in an open-air theatre with a stage which is the fruit of the imagination of Denis Krief – director, set designer and costume designer of world renown. In the interval between the two concerts, you can dine in an open-air restaurant where a Mediterranean menu is served.

This 2022 summer season extends from 17 until 30 June and is, as in the past, held in collaboration especially with institutes of foreign countries: this year those of Poland, Israel, Iran, Japan and Argentina stand out. Therefore, going to concerts in the garden of the Roman Philharmonic Academy is also a way to listen to rarely performed music. In addition, young groups are often relied upon for performances: an opportunity to know those who tomorrow will be the protagonists of large concert organizations.

I went the first evening, on 17 June: after a documentary on the two hundred years of the Roman Philharmonic Academy (in Sala Casella), we went to the open-air theatre for a concert entitled Alla Polacca (In Polish Style) and performed by an ensemble of ladies, the chamber ensemble Giardino di Delizie, all female and with strictly period instruments.

I know from personal experience how difficult it is to be familiar with Polish music. I am working on an essay on music, religion and politics in twentieth-century Poland: without the collaboration of the Polish Institute of Culture in Rome, and without the purchase of texts and CDs in Warsaw, not even the first line would have been written.

The music performed on 17 June 2022 refers to a different period, that from the second half of the sixteenth century to the end of the first half of the seventeenth century. Then the Kingdom of Poland was led by particularly music-loving kings. While creating a ‘Polish school’, they hosted at Court great foreign musicians (such as the German Telemann and the Italians Picchi and Merulzi). Thus, the great masters of the Polish Baroque, such as Marcin Mielczewski and Adam Jarzebski, were, so to speak, bred from the world of Germanic and Italian Baroque.

The nine pieces of the concert wisely alternate Polish composers with those from other countries so that the nuances of the former can be grasped also as the latter, invited to the Court, tried to adapt their music to the ‘Polish style’. A concert only or mainly for scholars of music history? Not really, and not only because this baroque is so sweet that it fits perfectly into the Philharmonic Garden and its atmosphere.

It was a great success, and there were requests for an encore to which the ladies responded with a short but complex piece by Telemann. 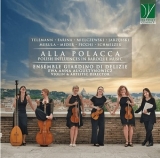 This CD contains a varied collection which, under the title Alla Polacca, offers a journey through Poland as seen by Polish and also foreign composers who lived, worked or traveled to Poland during the Baroque period.
This makes a good inventory of what was written in the Polish style at that time.
The CD is a great pleasure to listen to from beginning to end. First of all, we admire the liveliness and lightness of interpretation, which makes this unknown repertoire very accessible. The interpretations are very sensitive and of impressive creative power.